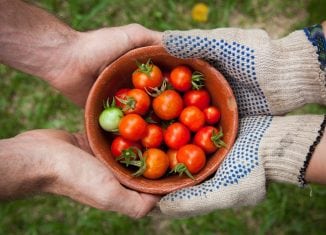 With combined efforts from the TSET Healthy Living Program (HLP) serving Atoka county and the entire Atoka community, the Atoka Farmers Market officially opened in the summer of 2017. The market has had great community support since opening and provides the opportunity to purchase locally grown produce. Congratulations to Atoka for taking strides to uphold programs that encourage people to eat local and healthy!

This story begins approximately 15 years ago. Atoka’s Farmers Market was located on a corner of a very busy intersection located on Highway 69/75. The market mainly consisted of flea market vendors, sale of live chickens, garage sale items, home canned goods, antiques, and very little fresh produce. The Choctaw Nation built a sheltered awning specifically for growers, however, without a designated farmers market manager, flea market vendors used the shelter to set up their booths and growers were left in the hot sun to sell their fresh vegetables. Eventually, growers grew weary with the location and began to set up at other intersections in Atoka.

In order to offer residents and travelers the opportunity for fresh produce, efforts were made to rekindle a farmers market, but negative input stalled efforts. Comments such as: “It will never work,” “We tried this before,” and “Nobody will show up” were common.

In the spring of 2016, the Atoka/Coal Healthy Living Program began to organize the community to form a farmers market committee. Invitations were sent to local growers, the Atoka Oklahoma State University (OSU) Extension office, representatives from the City of Atoka, Choctaw Nation of Oklahoma, and to the community at large. Throughout the year, meetings continued to progress with the valued input from the men and women who were passionate about an organized market. The Atoka/Coal HLP continued to assist with moderating and inviting valuable partners to each meeting such as The Choctaw Nation of Oklahoma’s Agriculture Department and the local US Department of Agriculture (USDA) office.

Reaching Agreement on the Details

Nearly one year later, the Market was organized. However, due to conflicting opinions, property availability, and safety concerns; identifying an ideal location was no easy task. Funding sustainability was also an issue for the market. Growers were firm on their petition for the Market to be on a corner intersection of Hwy 69/75; the City of Atoka wanted the Market in historic downtown Atoka. Instead a location was identified just north of Atoka on the Atoka Museum grounds, where turn lanes and medians made the entrance safer and more accessible.

The farmers market committee decided to apply for non-profit status, but required assistance and expertise. The Atoka/Coal HLP suggested hiring a farmers market consultant to assist with by-laws, rules for Market, and application for non-profit status. In May 2017, the Atoka/Coal HLP sub-contracted with Coleen Thornton and Lahoma Simmons to provide consultation to the farmers market committee. In addition to essential services, as mentioned above, Mrs. Thornton and Mrs. Simmons identified recommendations to conduct a community interest survey for a farmers market and a survey for growers to determine what type of vendors were needed. Consultants also provided food safety training for growers, continued guidance on market promotion, and a safety surveillance for the chosen location. The Choctaw Nation of Oklahoma Agriculture Department provided canopy tents, tables, newspaper ads, and road side signs to the farmers market. Once the market establishes a permanent location, the Nation will also provide a billboard advertisement.

With the combined efforts of the Atoka/Coal HLP, dedicated community members, growers, the Choctaw Nation of Oklahoma Agricultural Services, and the Atoka Historical Museum, the Atoka Farmers Market officially opened June 10th, 2017. Growers are pleased with the organization of the Market and support they received from organizers. The Community supports the Market and remains excited about the opportunity to purchase locally grown produce. The investment of consultation services was a turning point in accelerating the dream of a farmers market into reality.

USDA has offered their assistance with a grant application for the building of a permanent structure. Current negotiations for a permanent location are underway. Hopefully next year, Atoka/Coal HLP will be reporting on the new building of Atoka’s Farmers Market.

The Atoka Farmers Market has been featured in local media outlets, like the Atoka County Times, where anecdotes from growers, Chickasaw and Choctaw voucher programs for elders, and funding opportunities for Farmers Markets are featured.

Interested in learning more about how the Atoka Farmers Market became a thriving fixture in the community? Reach out to Wanda Berggren, Atoka/Coal Healthy Living Program.

Take a few minutes to submit your story to be featured on OK In the Know, and bring light to policies, practices and programs that are getting Oklahoma communities healthier! Share a brief tip here in the Forum [members only], or fill out 6 easy questions in a web form to tell your success story! Describe what you did, how you developed the idea, and lessons you are learning.

Click here to learn more about how to have your community health initiative featured in the “Oklahoma Spotlight” section of this site.