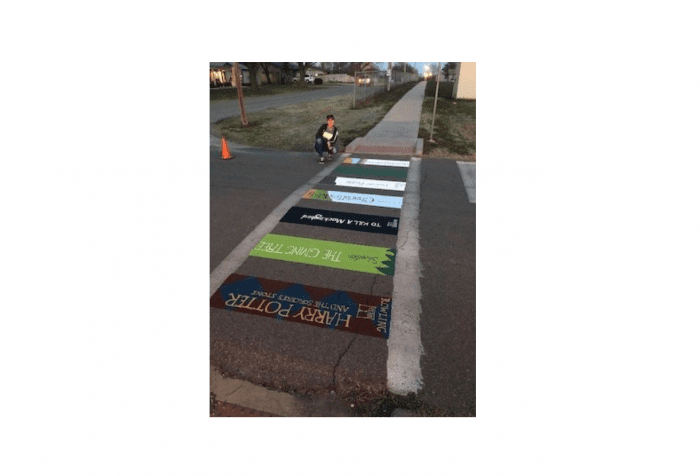 The TSET HLP team spent all day March 6 painting a crosswalk near the city’s library and Pioneer Intermediate School, in the area of North Fifth Street and East Pecan Avenue. Because of its proximity to the library and school, the crosswalk has an artistic theme of book spines.

How did you develop this idea?

“We wanted to improve walkability in the community, encourage people to walk outdoors, encourage cars to drive slower near crosswalks, and create a more inviting, safe walking environment,” said Chandler Scarbrough, a TSET HLP coordinator in Cleveland County who came up with the theme. 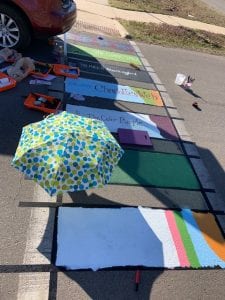 Scarbrough said the activity was part of a crosswalk painting contest that was to precede a Noble Open Streets event on March 14. But two other organizations that planned to paint crosswalks that day were unable to, and Open Streets was canceled a few days later due to the novel coronavirus pandemic.

But the TSET HLP staff remained eager to paint their crosswalk for a project that depended on supportive partnerships with the City of Noble, Noble SWAT, Noble Police and the Pioneer Library System. Scarbrough said those partnerships were cultivated over several years by Aley Cristelli, the HLP coordinator who works with cities and governments in Cleveland County.

“Our HLP group decided to follow through with our plan as a walkability demonstration to improve a lackluster crosswalk that is on the Noble Walk to School route,” she said.

How much volunteer effort did it take?

Though Scarbrough is a can-do, take-charge person who gets things done, she was reminded – and therefore advises – that no one can take on community projects like this alone. She planned the day to the smallest details and thought she could handle everything, and so kindly rebuffed her colleagues’ repeated offers to help.

But once March 6 arrived, Scarbrough said she was so glad and relieved that fellow coordinators Reita Babek and Aley Cristelli and manager Stephanie McGinnis opted to show up and support her anyway. 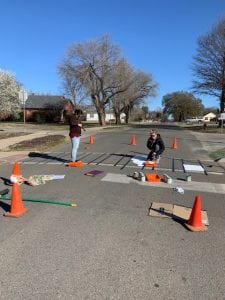 “There is no way I could have gotten it done if they hadn’t showed up,” Scarbrough, who spent 11 hours at the painting site even with their assistance. “Each helped in preparation for the painting by measuring, taping, laying the base coats, touching-up and cleaning. … So if you want to do this, be sure to have a team ready.”

External partners are every bit as important for making community wellness projects happen.

As Scarbrough said, “it helps to have a good relationship with the chief of police or someone else with the city,” for which she credits Cristelli.

So ultimately, despite the surprises and cancelations – at least for now – Scarbrough is grateful for the day and all the planning and collaboration that led up to it.

“I had a blast,” she said. “The weather was super nice that day, and I personally like artwork and things like that.” 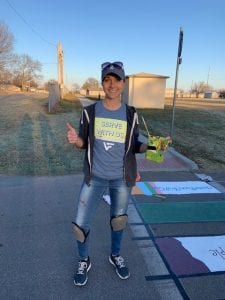 To learn more about this community effort, or to get involved, contact TSET HLP coordinators Chandler Scarbrough and Aley Cristelli.

Enjoyed this story? Have your own success story to share?

Take a few minutes to submit your story to be featured on OK In the Know, and bring light to policies, practices and programs that are making Oklahoma communities healthier! Fill out 6 easy questions to tell your success story! Describe what you did, how you developed the idea, and lessons you are learning. Click here to learn more about how to have your community health initiative featured in the “Oklahoma Spotlight” section of this site.